Write for Your Writes-- Article by Karen Newton 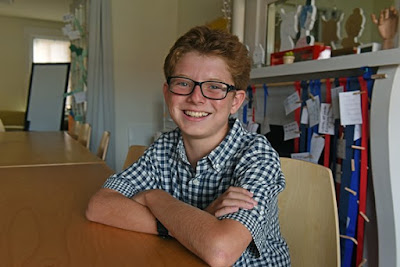 When Henry Haggard returns to middle school in the fall, writing a paper on how he spent summer vacation should be a snap: He was busy online fighting for what he believes in.

It was while the 12-year old was arguing a point on a YouTube comment thread and being called “autistic” and “a crazy liberal” for his views that he realized the futility of virtual arguments. Before leaving the thread, he posted a final thought.

“Our job right now is to participate in protests or petitions for whatever you believe in. Personally, I will be fighting for equality for all, therefore, the investigation of Donald Trump. I suggest that we all get off of our screen and do something. I am not leaving this argument to avoid replies, I am leaving to do something bigger, something important. Good luck to everyone and their political views."

Haggard’s first step was going to the American Civil Liberties Union website, only to discover there were no events scheduled in the Richmond area. He immediately hit “host an event” and created “Write for Your Rights,” an opportunity for participants to write letters telling their legislators what matters to them. During a conference call with the ACLU, Haggard was told to create a Facebook group in order to be listed on the ACLU’s official spreadsheet. The result was ACLU People Power Richmond, VA on both Facebook and Instagram.

“What gave me the confidence for doing this was running for student council treasurer at Tuckahoe Middle School,” he explains. Because of his interest in math and finances, his slogan was “Money matters, vote Haggard” and he won handily.

Only after he’d created the event did the young activist tell his mother what he’d been up to and she helped by securing the venue, the Richmond Young Writers workshop space near Carytown. In anticipation of the event, Haggard has printed a list of names and addresses for the president, vice-president and cabinet members, along with Virginia state representatives, as well as a breakdown of the Bill of Rights and current legislative acts which participants may want to address in their correspondence.

The math lover also is planning a financial component to his event. Two buckets will solicit donations for the ACLU: “The donation bucket proceeds will be helpful to sue the Trump administration,” he notes, with donors being asked to vote with their cash as to who’s worse, Trump or Pence.

“When I grow up, I want to be an aerospace engineer,” says the kid who attended NASA space camp last summer. “But with the state of our country, I might have to become a politician.”

Editor's note: FB suspended Henry's FB account because he is three months shy of 13-- their age requirement. Here is a link to the actual ACLU event page.

Henry's Note: I am not personally suing Trump, nor giving any legal support to an unnamed lawsuit. This fundraiser was donated to the ACLU of Virginia to help this legal charity to do legal charity things, such as lawsuits.
Posted by Henry at 4:45 PM